This past week we had one of those Sundays when the unexpected became the theme of morning worship. I’m sure we’ve all had those days when, despite well laid plans, things simply go…well, by another plan. Or perhaps, Another’s plan.

I had gotten to church a little later than I planned, so that sort of threw me off from the beginning. I felt a little rattled and distracted. Then, when I went to put on my wireless microphone I remembered the wire around the ear piece was broken. No big deal. I simply taped it to my face and off I went to pray with the choir right before the service was to begin.

Everything was smoothing out quite nicely as we walked in and I flipped the mic on to say good morning to everyone. Only there was no sound. I shuffled around and realized when the ear piece broke the week before the connection must have been severed so I wasn’t going to be able to move around and speak as usual.

No big deal. I would just discipline myself to stay at the pulpit (I usually roam around the chancel when I preach because I feel disconnected from everyone if I stand in the pulpit) this morning. Only the pulpit mic seemed to be out of commission as well. A few of us shuffled around trying unsuccessfully to fix it until, finally I awkwardly laughed it off saying I would just speak out of the lectern (on the opposite side from the pulpit) microphone. And, although it felt like we’d gotten off to an awkard start, it was really no big deal. This church family is always so grace-filled and good humored. And, I was going to be preaching on Job, and, after all, Job had a lot more to deal with than a few measely technical difficulties. (Ever heard the expression, “the patience of Job”?)

The service preceded smoothly from that point (I think!), right up until we were getting ready to begin the congregational prayer time. There was a knock at the side door. It persisted until someone got up to open it and see who was there. There was a man in a wheel chair who I had seen several times recently. He had come by the church asking for assistance and food and we had helped him as much as we could.

He was now at the church asking to see me. An unplanned interruption but, no big deal. That’s what I’m here for, right?! So, I walked to the door to see what he wanted to see me about. I invited him in to join us for prayer time. He came in and when I took prayer requests he suggested we pray for the church. And that we did.

After the service I noticed several people visiting with him and some even giving him money. No one made a big deal about it. In fact, everyone seemed intentional on making him feel welcomed and comfortable. He left and I was left pondering how disjointed the service had felt to me and how thankful I was that this man felt comfortable enough to interrupt the service. I was glad that when he had knocked, the door had been opened to him.

I didn’t think much more about it until after his visit the next day. He came by the office and I assumed he would be asking for something and I was once again prepared to tell him that the church could give him food but we didn’t have the resources to give him money. I’m ashamed to admit this but I was hoping he wasn’t planning on coming by every day. I hoped this wouldn’t become a big deal.

Before I could remind him what we could do for him and what we couldn’t, he said that he hadn’t come to ask for anything but to give. He said he remembered hearing we are going to have a rummage sale at the church soon and he had a few things he would like to donate to the cause. (If you feel ashamed at me for what I had been thinking before you are not alone. I do too. )

For the next few minutes he pulled a number of things out of his back pack. Two pairs of shoes. A stuffed Snow White doll. A rubber ball. He held up a pair of jeans and said he would bring them back if they didn’t fit his granddaughter but, he wanted her to try them on first.

He told us that he had gotten these things out of the dumpsters around town. And he thought they might bring a few dollars for the church if sold in the rummage sale. The only thing he asked for was some water. Some cool water for the hot day. No big deal.

I couldn’t quit thinking of him last night. What was the deal with this man of the streets?

I saw him again earlier today sitting on the street corner downtown, a few blocks from the church. We smiled and waived at each other. My heart is full, and my tear ducts too, as I think of his generosity. This man, who by all society standards, really has nothing to give. And yet, he had listened, perceived, and given what he could gather, to help others. That’s a really big deal.

Beloved ones, I think this is what Jesus was getting at when he taught his disciples to pray for it to be on earth, right here in our daily lives, as it is in heaven. This man is quietly and tenderly doing his part to bring that prayer into reality.

May you know the love of God for you today. In the little things. And the big deals.

Something to chew on… 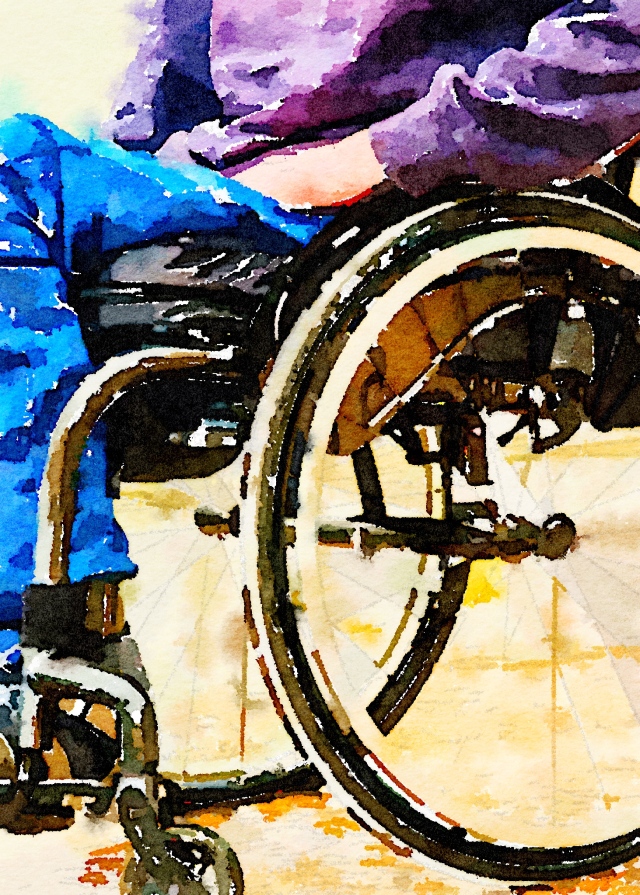 7 Responses to a few little things, a very big deal